The analysis assessed risks to media plurality in the EU, Turkey and Montenegro using data gathered over the year of 2016. Cyprus, Italy and Norway were only a few of the majority of countries who scored a medium risk in most categories, on a three-level scale from low to high risk. It considered four topical areas which could be of concern: basic protection of freedom (of main foundations for freedom of expression and media pluralism), market plurality, political independence and social inclusiveness. 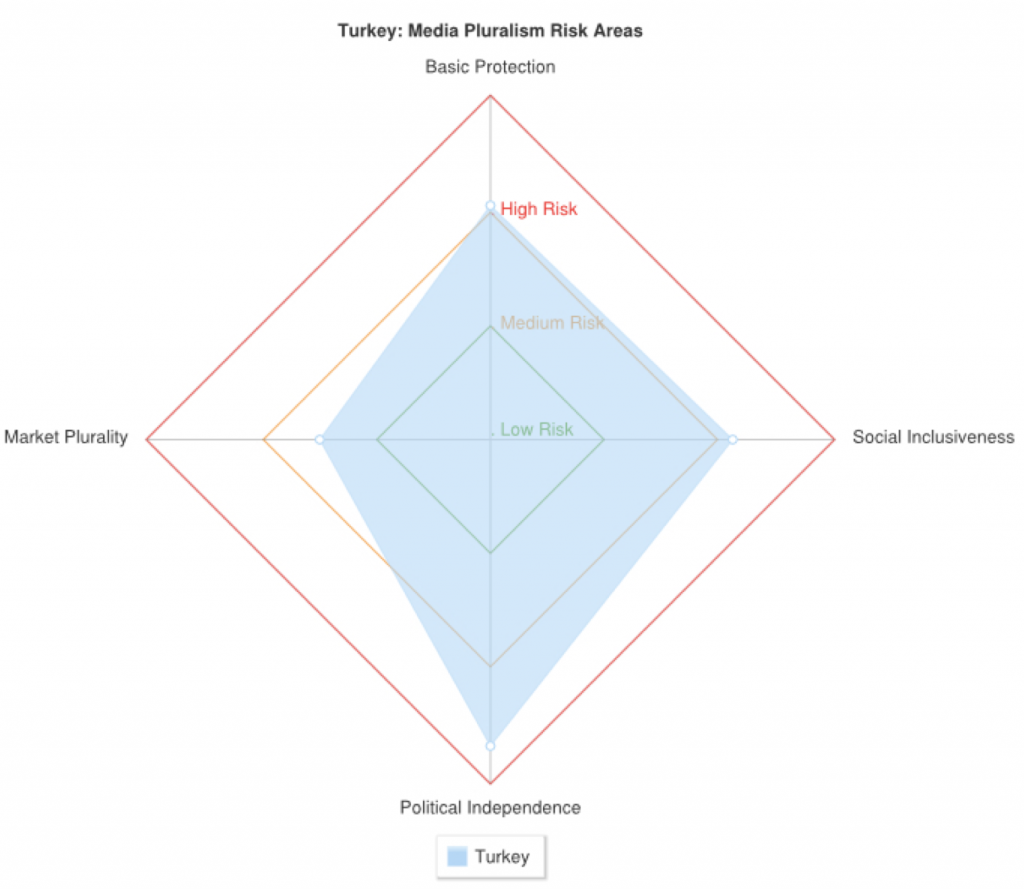 Major findings of concern included the high concentration of media ownership, in which horizontal ownership showed a high-risk assessment at about 70%. This is further problematic due to the lack of transparency in that ownership in most countries, which makes biases challenging to identify to the general population.

Another key concern is the political involvement in some countries’ media: political pressure on media can be found across Europe. furthermore, risk to editorial autonomy makes it one of the most vulnerable aspects of media, since it can be shaped and influenced both economically and politically. 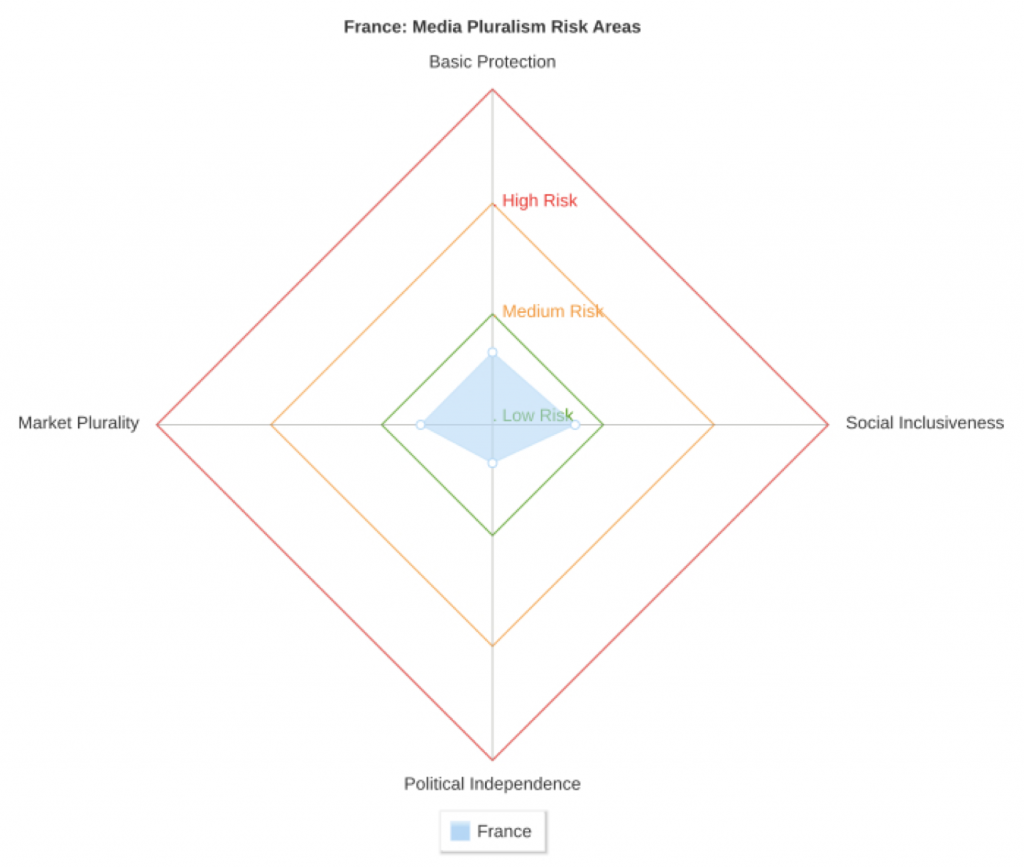 Finally, the last great concerns in the report come in terms of accessibility to all. Most states have underdeveloped policies regarding media literacy, or none at all. Furthermore, many minority groups have inadequate access to media, and “community media” is non-existent in several countries. None scored a low risk on the representation of women as subjects and sources in news, which indicates that women might be heavily underrepresented in media across Europe.

Turkey had one of the highest risk rates in the overall Monitor score. Meanwhile, France has one of the lowest risk scores, being the only country to score a low risk in all areas of analysis.

Basic protections included protections enjoyed by journalists which allow them to work, people’s right to access information and freedom of expression, and the media’s capacity to act independently and reach its audience either through traditional means (newspapers, broadcast) or online.

In the analysis, the results showed that 18 out of the 30 states scored an averaged low risk of the five elements assessed while 11 scored a medium risk, with the major influence in the numbers being the concern over access to the internet and the reach of traditional media. One country in particular, Turkey, scored a high risk, while Montenegro held high scores which averaged out into a medium risk score.

Notably, Hungary showed a high risk at 81% in that area, mostly due to the fact that universal access for fixed line and mobile have yet to be achieved. On the other hand, in countries such as Denmark, Finland, and the Netherlands, broadband coverage reaches almost 100% (Netherlands 99.9%, Finland 99.8% and Denmark 99.7%).

Regarding internet access, 23 countries scored a medium or high risk, with seven countries reaching a low-risk level. This shows a high concentration of market shares under the TOP 4 Internet Service providers’ (ISPs) control in 22 out 30 states. ISPs are also the actors responsible for internet neutrality. Having said that, since April in 2016, net neutrality rules are in synchrony across the EU and so the levels are under control; meanwhile, Montenegro and Turkey have high-risk scores regarding net neutrality, as it is not in their laws.

Punctually, the majority of states analysed provide the basic conditions for plurality in the media environment, but they also present shortcomings within specific areas of the analysis which could benefit from focused attention.

Market plurality evaluates the risks in the levels of transparency in/and media ownership concentration, editorial influence by politics and commerce and the economic viability of the conditions in which it operates. Considering the four areas of the Monitor, the market plurality indicators present the most alarming levels of risk.

In market plurality, most countries (25 out of 30) scored a medium risk in an average of the five indicators. Bulgaria and Luxembourg scored a high risk, while the only three countries to average at a low risk were France, Germany and Portugal.

The media ownership indicator has a high-risk assessment, with zero countries scoring a low risk. The results present data at a high level of risk of 70% for both candidate countries and all 28 EU members analysed. It is the most worrisome indicator in the entire report, scoring the highest across indicators in all areas.

Media concentration, horizontal ownership, or monomedia, is a matter of concern as a representation of the influence of one or some media owners in a sector. 19 countries score a high risk while 11 score a medium risk, and no country scored a low-risk assessment. The results reflect the natural tendency in media markets to concentrate due to high entry barriers, economies of scale, and regulatory leniency. Tolerance to mergers and the relaxation of media ownership restrictions can be observed in several countries (UK, Spain…), which allows for expansion and presence across EU markets.

Furthermore, commercial and owner influence over editorial content is also worrisome. It scores a medium risk at 58%, one of the highest in the report.

These results are not due to a lack of legislation on transparency of ownership, but due to ineffective implementation of said legislation and lack of clarity in ownership. That is the case when the proprietor is abroad, or the company is not subject to sector-specific rules in communications. 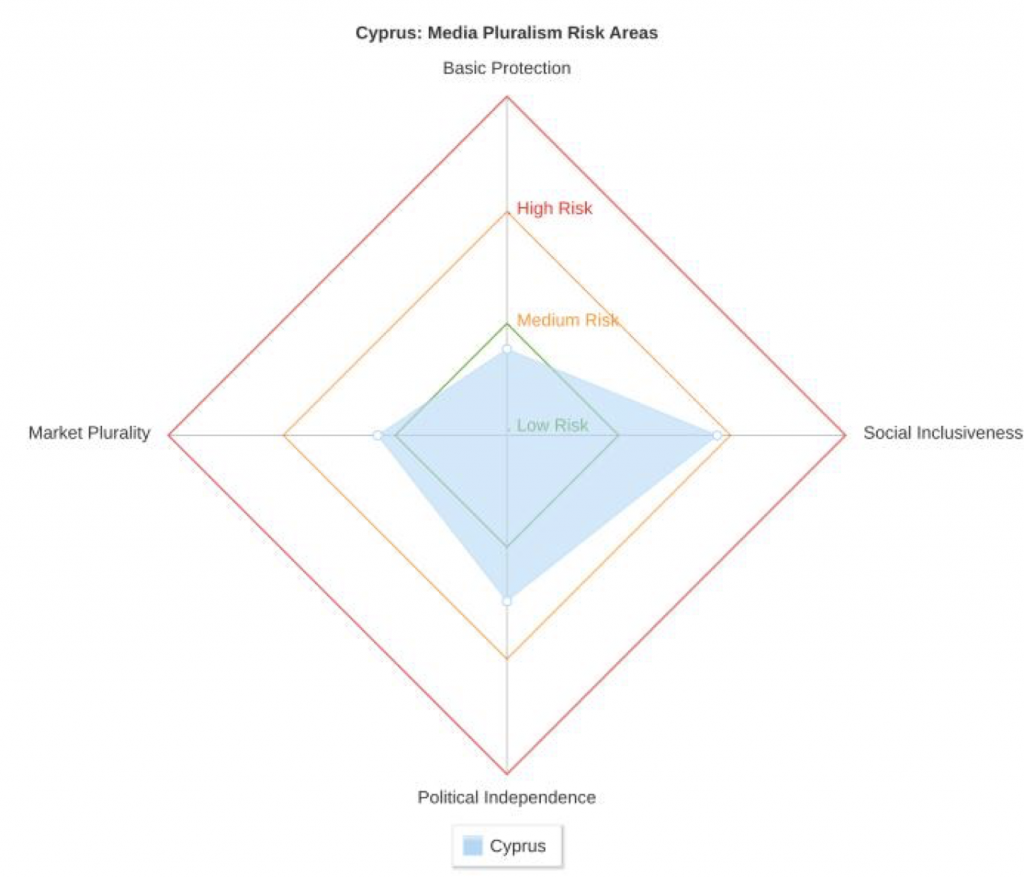 For instance, in the Czech Republic, a license can be acquired by broadcasters only when they share information about their shareholders and their governing bodies. In Cyprus, broadcasters are expected to publish the names of owners of more than 5% of their capital in daily newspapers. In both cases, the regulations are in place, however, neither Cyprus or the Czech Republic present similar responsibilities in the press sector, resulting in limited knowledge on who controls that media.

Overall, the results in market plurality support the notion of a trend to remove ownership restrictions on media ownership, which may allow for domestic conglomerates to resist external media sources which may enter the EU media markets. However, there is a need for transparency, since public authorities must know who owns the media in order to monitor and regulate it, and the audience should know in order to make informed decisions about the information they consume.

Political independence assesses the risk of influence of politics in a media’s system, organisations, newsrooms, content selection and editing. That is done by analysing the relationship between the state and the media, and on benefits and regulations imposed on it by the state. The indicators include political control of outlets, editorial independence, media and democratic electoral process, state regulations and support, and independence of government and funding.

The majority of states scored a medium risk in the area, at 18 out of 30. Eight scored a low risk, while four were ranked at a high risk of political influence (Turkey, Montenegro, Hungary and Slovenia).

Montenegro and Turkey, the two candidate countries, show high risks of political influence, which will require addressing if the intention is to pursue a membership at the EU.

In Turkey, both media and journalists are particularly at risk, since the government have actively engaged in censoring and denying access to media. The situation has only worsened since the attempted coup in 2016, in which the state of emergency was declared, and has since developed a more oppressive environment for the media.

On the other hand, Belgium and Portugal were two of the only four countries to score a low risk. Belgium is one of the countries whose media model is characterised by strong professionalisation and self-regulation of journalism, which the report deemed effective as a protection from political influence. Portugal has undergone media legislation changes propped in 2014, which the report has rendered effective as a form to make regulation more effective and less politically influenced.

The overall scores of the analysed countries averaged at a medium risk, with the majority (21) earning a medium risk score in social inclusiveness. It examined five indicators: access to the media by minorities, by people with disabilities, by women, access and availability to local and community media, and media literacy in the state.

The majority of countries offers underdeveloped or no media literacy policy or teaching of it at all. All countries scored at least a medium or higher risk on the representation of women on media, with 18 countries for offline and 16 for online news, and the access of minorities to media is limited.

In terms of access to media for women, both their access as audience and professionals in the field were accounted for. It is the indicator with the highest risk in social inclusiveness, rated at a 54% average on the 30 states’ results, and one of the highest in the entire report.

Women represent 51% of the total European population, but they don’t even make the 40% of the media workforce threshold established by the MPM, in newspapers, broadcast and policymaking roles regarding media.

No country in the MPM represents women adequately in media. For instance, in Romania, representation ranges from 35% to 38%. Meanwhile, Montenegro and Cyprus have numbers as low as 14% and 7%.

This goes to raise questions about whether women are properly represented across Europe, and illustrates that minority groups face challenges in both being represented in and having access to media.

If anything, the 2016 report shows how on the fence EU is about media plurality. Media plurality is not only threatened by violence against journalists and censorship; journalistic impartiality and integrity both depend on an environment that does not bias reports towards political or economic goals, and does not compel media to cater to a specific share of the audience that has sole access to media.

It demonstrates that even the EU, and certainly no individual member state, is immune from threats to media pluralism. A trend has been piling up over the last few reports, with a slow but present increase in risk to media plurality observed in previous MPMs.

The 2017 MPM report will be implemented in all EU states, Serbia and the former Yugoslav Republic of Macedonia.