The irony is glaring: Kiev government banning journalists from attending a conference on freedom of speech. If the Ukrainians don’t see the problem, they need more than a conference to appreciate what press freedom is all about.

I write this sitting in the departure lounge of Boryspil airport in Kiev. I’ve been here for the past eight hours after being denied entry into Ukraine because “in accordance with Ukrainian law regarding border control” – so the declaration I was asked to sign reads in Ukrainian – “there is a decision of the State authorities to ban the entrance of British citizen Paula Slier. She was informed about it.”

I certainly was – thirty seconds before I was given the form to sign and escorted from the office where I’d been waiting for an hour-and-a-half to hear my fate. My passport had been flagged at customs and I’d been called aside. To be fair, the airport security treated me decently enough but were not forthcoming with any reasons as to why I’d been listed “an enemy of the State” which is how those of us working for Russian networks have come to be regarded.

Thank heavens! I have been given my passport back! I leave in 1,5 hours #Ukraine#FOMUkrainepic.twitter.com/Bir7pTsNOS

Of course I explained the purpose of my visit and gave the border guards my press credentials, but to no avail. A colleague, Yevgeny Primakov of the Rossiya 24 channel, was also denied entry and like me, banned from returning to Ukraine for the next five years.

We were both planning to participate in a conference organized by the Organization for Security and Co-operation in Europe (OSCE) dedicated to – as the conference program states – “strengthening media freedom and pluralism in Ukraine during times of conflict in and around the country”.

This is the topic of the #OSCE conference – while #OSCE states discuss press freedom in #Ukraine I’m being deported along with a Russian colleague #FOMUkrainepic.twitter.com/Jdby1Ktswt

The irony is glaring – the Ukrainian government banning journalists from attending a conference on freedom of speech. If the Ukrainians don’t understand the problem, then they need more than a conference to appreciate what press freedom is all about.

What were they so afraid of? If it was something I was going to say at the meeting, then I can just as well write it here. There were four points I was hoping to put across:

Now I know Kiev doesn’t regard those of us working for Russian media as “proper”journalists and the charge is repeatedly leveled at us that we are “propagandists”working for state-funded media. But I have a few questions:

I have attended at least half a dozen OSCE workshops aimed at achieving similar objectives to this one; namely finding ways to protecting journalists’ safety and create media freedom and pluralism in times of conflict across OSCE states. Held under the auspices of the office of the Representative on Freedom of the Media, the conferences are usually held at the organization’s headquarters in Vienna. I don’t understand why the decision was made to hold the latest one in Kiev.

The OSCE issued a statement saying it was “regretful” that Primakov and myself were barred from entering, but words are of little value when those same people are busy engaging with Ukraine’s media and civil society community about press freedom and when given the first opportunity to change something on the ground, shy away from it. When the issue was brought up at the conference by the Russian delegation it was ignored. 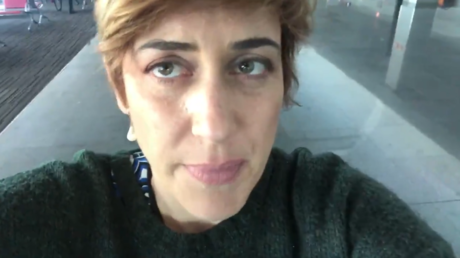 I have wondered many times in the past whey I even attend such conferences. Whenever I stand up to speak, I am either heckled at or snubbed by the Ukrainian contingent. The problem is that it’s not just them. Most of the representatives sitting around the table support Kiev and there’s a deafness to hearing anything that even vaguely supports the Russian point of view, or even just questions the Ukrainian government’s take on events. There is never a speaker on any panel who holds such a view. I once approached a group of Ukrainian journalists and extended my hand in an effort to have a one-on-one but they literally turned their backs on me.

I understand just how upsetting the situation is but if we as journalists and media workers who claim to care about press freedom can’t come together to protect journalists’ safety then how do we expect others to? I brought this up at one conference and the retort from the Ukrainian contingent was that I’m not a journalist. This creates a dangerous precedent that paves the way for others to intimidate and harass and possibly even harm me. The last time I was in Kiev I received death threats and an online witch-hunt ensued to track me down. It was decided with my editors in Moscow to pull me out before the situation got out of hand.

And so it was after a lot of soul-searching that I even decided to go back to Kiev this time around. As far as I knew I was not on any blacklist and I felt the conference was important enough to attend, even if only to put across a different narrative to the one that repeats itself all the time. I might not be heard; but it won’t be for lack of trying.

This is an already fragile moment for the media and the actions of the Ukrainian government in banning Primakov and myself only further strain relations. The OSCE objectives are noble and necessary but more needs to be done. The conference program reads that the open event will “offer national authorities guidance as they strive to protect freedom of expression and media freedom during times of conflict and propaganda while respecting the relevant OSCE commitments.” But when the first opportunity to do so arose, they failed miserably.